While the 1970s were known as the 'Me' Decade, this was also a time that saw great societal change: The Beatles split, President Richard Nixon resigned, and the Vietnam War finally ended. The period was also known for the birth of disco and punk rock, Sea Monkeys, Rubik's cubes and yes, even streaking.

This era is still recent enough that many people remember a lot about it. At the same time, it's just distant enough to present trivia buffs with a challenge. Whether you lived through the 70s or you're just now enjoying them in retrospect, print out these trivia sheets and see how many questions you and your friends can answer.

If you need help downloading any of the printables, check out these helpful tips.

If you have a fondness for 70s culture, you're bound to enjoy this set of trivia questions. It's like opening up a time capsule to everyday life in that era. You'll find questions about popular fads, fashions, toys and more. Just to whet your appetite, take a look at a few sample questions.

Feel like you're ready to dive in? Go ahead and print out the full trivia sheet, but don't peek at the answers until you've answered all the questions. 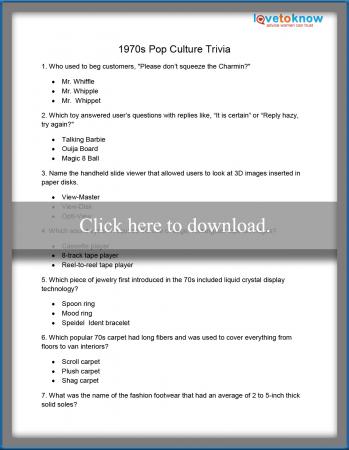 Are you a fan of vintage 70s television? This trivia set is filled with questions about all kinds of shows from sitcoms to dramas to those classic variety shows. Check out some of the questions.

Think you know enough to accept this trivia challenge? Print it out and put your knowledge to the test. 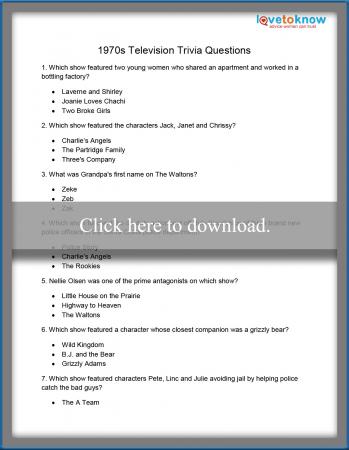 However you feel about this decade, there's no denying that it was a glorious time for music. You'll find questions about the Grammys, classic albums, some of the most influential artists of the decade and more. Take a peek at a few questions from this set. 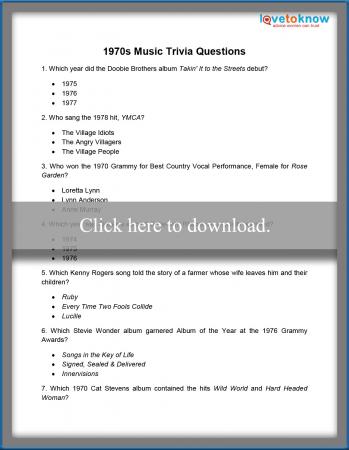 Create Your Own Quiz

There's so much to explore about this decade that you might feel inspired to create trivia sets for even more topics. Just be sure to:

These trivia sets are great for gatherings. You might even decide to include them as part of the festivities for an entire 70s theme party. Once the disco-dancing ends and the cheese fondue and Chex mix have been eaten, encourage your guests to sit back with a Tab, some Country Time Lemonade, or maybe even a little Sangria, and let them test their 1970s knowledge.